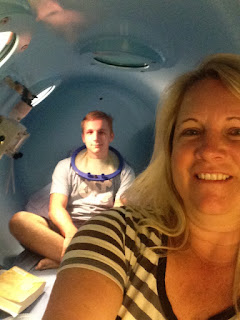 Hyperbaric Oxygen Treatment has been a long and steady journey. Each day, 5 days a week, Garren and either I or Nancy have been sitting in that chamber for 90 minutes, while Garren breathes 100% oxygen. We have had lots of time for reading, napping, and watching the minutes tick by. We are often asked "How's Garren's treatments going?" I'd love to have a definite answer, but the truth is, we don't really know for sure.

Originally the doctor recommended 40 treatments, followed by a reassessment to determine whether or not to continue. As treatment #40 approached, we were able to discuss things with the doctor. He relies very much on our observation of Garren. Has anything change? Do we notice anything new? What does Garren think?

We have seen some improvements, small but profound. I mentioned earlier the healed lip which had been unable to heal for almost 2 years. The left side of Garren's face has lifted, making his smile more symmetrical. Garren says he feels more energy, and that he can tell a difference in his balance. Small things like this tell us that something is happening. But it is difficult to determine how much.

Our biggest prayer for Garren is that he would regain the ability to swallow. A close second is the ability to balance and walk by himself. We are setting up an appointment with Garren's speech therapist to perform a swallow test. It's been over a year since we've had this done. The last time we did this, his therapist had seen some small changes over the previous swallow test. We are hopeful that there will be more improvement this time.

Garren 40th treatment was today.  We have decided at this point, per the doctor's recommendation to take 3-4 weeks off from the oxygen therapy. This will give Garren's body a chance to "catch up" to the treatments and continue to heal. After that we will probably continue with 20 more treatments.

We want to thank you all so much for your continued support, prayers and encouragement. We are so blessed to have you in our lives. Thank you!

Geoffrey Janes
Husband of one, father of three, in search of God's next adventure.