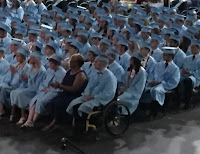 Yesterday Garren took the walk he's been waiting to take for 18 years: high school graduation! We are so proud of him! We are so thankful that we were able to witness what we saw yesterday. 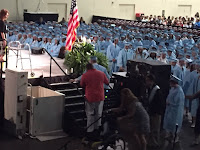 There was a time when we didn't know if it would even be possible. Garren has spent his 4 years of high school in a wheelchair. Freshman year it was a motor chair, controlled by moving a joystick with his right hand. By his senior year Garren was able to move himself around in his manual chair. In class he often transferred from his wheelchair into a desk like everyone else. He even took weightlifting, bench pressing up to 200 lbs by the end of the year!

Garren has been using his walker more and more around the house. He has really seen improvement recently. We are certain that the hyperbaric oxygen treatments are having a positive effect. Garren even said that he can tell that he has better balance.

A couple of months ago when we had a conversation with the school about how to get Garren across the stage for graduation, we told them that Garren wanted to walk. Of course they were elated at the idea. The staff at Piedmont High School has gone above and beyond to make sure Garren has had everything he needed to complete his high school career. They wanted to see him finish big.

As the graduates lined up to receive their diplomas, Garren rolled his chair to the bottom of the stairs. With the help of Mr. Capers (Garren's assistant throughout high school) he made his way to the top of the stairs where his walker was waiting. Garren grabbed ahold of his walker and paused while the vice-principal announced his name - "Garren Michael Janes." Then he started his walk, one step at a time, until he reached Mr. Tyson, the principal. After about 3 steps, people began clapping. Then more joined in. One of the seniors sitting on the front row stood to his feet. Then several more joined him. By the time Garren reached the center of the stage where he would shake hands with Mr. Tyson and receive his diploma, every person in the arena was on their feet! 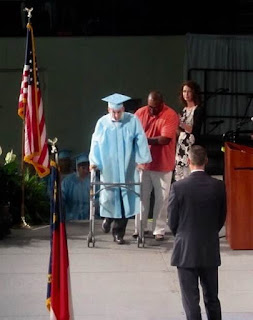 It was an amazing moment, a moment that could not have happened apart from the generous grace of our God in heaven.

Thank you for all your continued prayers and support. We would not be where we are without you.

Geoffrey Janes
Husband of one, father of three, in search of God's next adventure.